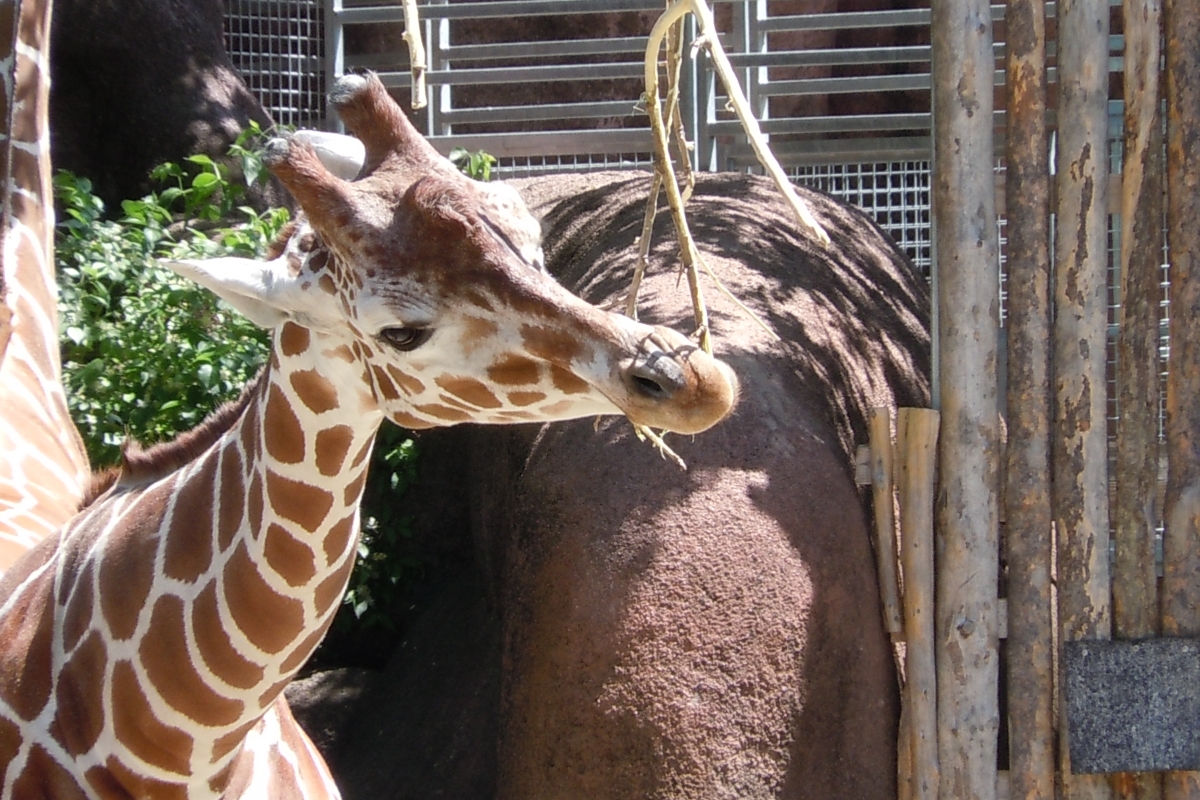 There is so much to see in St. Louis, and I am behind in posting both stories and photos. I just returned from my second trip to Missouri’s Gateway to the West, and of course the first place I (re)visited was the zoo.

The St. Louis Zoo is tucked into the southern end of a nearly 1,400-acre marvel called Forest Park. A visit to the zoo is free; parking costs extra, but if you don’t mind the walk, there are other areas in Forest Park where you can park at no cost.

My main goal in returning to the zoo was to visit the big cats, and as I stayed for most of the day, I was not disappointed (except by the shy and sleepy snow leopard, which I will talk about in another post).

I missed a lot last time, so chose first to ramble through the River’s Edge. (A cheetah was in there somewhere.) I found some hippos, a rhino, and a Malayan sun bear, which has an exceptionally long tongue to capture both insects and honey.

Unfortunately, the cheetah was occupied elsewhere. But I did manage to find a baby elephant.

I meandered around a few other areas before making my way over to Red Rocks. Once I see the giraffes, I know I am getting close.  The weather was warmer than my last visit, and the giraffes were much more active.

I am always amazed at how tall giraffes are. Newborn giraffes are six feet tall, and weigh about 150 pounds!

I have more photos to share, but I’ll end this post with one of my other favorite animals: a polar bear.

My husband, Bill, over-wintered in Milwaukee, Wisconsin, this year. It was the first time we had spent so much time apart since getting married several years ago. But he is a scientist, and must go where the jobs are. I was working in North Carolina, and as his was a contract job, it didn’t make sense for both of us to relocate.

I planned a week-long visit to see him, over Thanksgiving. We would spend a few days at the house he was renting, then travel to see his brother in Michigan for the actual holiday. I did some online research for places to visit on Monday and Tuesday, while he was at work. One of the first things that popped up on my screen was the Milwaukee County Zoo. As I flipped through the virtual pages, I gasped. The zoo had not one – but two snow leopards. A mother and baby. And tigers. How perfect. I could not believe my good fortune. The zoo was practically around the corner from where Bill was staying.

I have loved snow leopards since I first found out about them. I adore tigers, too, but snow leopards – sigh. Their heavy coats, their markings, their long, spotted tails, those huge feet! And their ability to blend into their background so as to be almost invisible in the stark Himalayas and other Asian habitats they live in, make them my favorite big cat. These endangered felines are found in 12 countries in Central Asia, and, as luck would have it, in roughly 70 zoos throughout the United States. Many of those zoos work in partnership with the Snow Leopard Trust to care for and raise awareness of the rare, majestic cats.

I was so excited. I went shopping for clothes: toasty shirts and pants, layers, and warm accessories. I made sure to remember my wool coat, a warm scarf, and my camera and its charger.

Weather was iffy up North, so I was stalled overnight in Charlotte, so it was mid-Tuesday before I made my way to Milwaukee, and into the arms of my husband. We spent that evening catching up. He had to work Wednesday, but encouraged me to visit the zoo on my own. I vacillated. It was cold. No, freezing. I’d have to go alone. But I was so close to seeing snow leopards. In the end, I decided to go.

I layered up, and made it to the zoo, extremely early, on Wednesday, way before it opened. I consulted with my smart-phone, parked myself inside a fast-food restaurant, and sipped hot coffee. It was cold, very cold, to this North Carolina girl. In the 20s, and the wind was blowing. All the better for snow leopards, though!

The zoo finally opened, and at first it seemed deserted. I consulted my map, and set out looking for cats. I found the tigers first. The family consisted of a mother and two sisters, but they had to be displayed separately, as the girls apparently had a bad case of sibling rivalry. Oh my goodness. That gorgeous she-tiger paced around the enclosure, looking out at us humans who were busy gawking and snapping photos. Although my camera is just your basic point-and-shoot digital, I took lots of pictures and attempted a short video. After walking around the cat enclosure long enough to warm up, and satisfied with my photos, I set out to see the snow leopards. I saw the sign, walked around the corner, and there they were. Blocked at first by photographers with real cameras and lenses the length of my arm, I took a breath, and squeezed in toward the window. There they were.

Tomiris, curled up inside a large log, had declared it naptime. Only her face was visible. She was adorable. I could see Sossy, the cub, just barely, positioning himself behind her. My simple cameras were not created for these conditions, but I managed a few decent shots. Then Sossy, in the way of toddlers everywhere, took advantage of his sleepy mother, crawled out of the log and began to explore. What luck! I snapped photos in awe, switching from my camera to my phone. I hoped and prayed for a few good snapshots.

It was darn cold that day, and the zoo closed at 4. I stayed as long as I could, marveling at the beauty of those beautiful big cats. I did manage to get some decent pictures, and a nice video of one of the tigers. On my way out, I discovered a toasty enclosure containing towering giraffes. I let my fingers thaw, and took more pictures. The trip was over too soon.

I have so many good memories of that day. I’m not a morning person, nor a fan of cold weather, and I’m not crazy about exploring new places by myself. But by choosing to do something outside my comfort zone, I saw my favorite animals up close, met a friendly, knowledgeable woman who spends so much free time at the zoo she knows most of the big cats by name, and rekindled a love of photography.

Each day offers all of us a number of choices. Not all are comfortable, or easy, or fit into our schedules as we would like. Sometimes, though, making a different choice proves worthwhile. You just have to make it.

6-5-15 – Just received a Facebook notice that Sossy, who just turned 1, passed away unexpectedly today. RIP, Sossy. You will be missed.

© Debbie Diljak and Nature (and Nurture), 2015, 2016, 2017, 2018. Unauthorized use and/or duplication of this material without express and written permission from this site’s author and/or owner is strictly prohibited. Excerpts and links may be used, provided that full and clear credit is given to Debbie Diljak and Nature (and Nurture) with appropriate and specific direction to the original content.